Han Jin, CEO and Cofounder of LUCID, jumped onto the Ask a CEO Podcast to share his journey towards and his experience as a CEO. Check out all other episodes of Ask a CEO here.

Han Jin had a very diverse childhood. A childhood this diverse is actually part of what makes his journey to being Forbes 30 under 30 so incredible. He has taken risks, and he has invested in himself in an exemplary way. Han Jin was born in China, and he grew up in Germany. The best part of his early life is that he did not plan to come and stay in the United States. First of all, he went to Sweden for education for a couple of years. Initially, the plan was to return to his home, but he somehow ended up in the USA. When he completed his Master’s degree from Silicon Valley, he realized that he had to stay here and work on creating his own company. That is how Han Jin got into entrepreneurship.

What drives Han Jin and his experience in entrepreneurship

Han Jin inherently loves establishing start-ups. He loves the entire experience of it. However, if we step back and take a look at his childhood and the trajectory he was on, we realize that he has had a come up which is much different from the traditional “heroic mastermind genius at the age of 15” story. He immediately rejected the notion that he was an entrepreneurial genius from a very young age.

His parents very much expected him to work at a big firm and “climb his way up the corporate ladder”, as they say. He did try working a job. He quitted his job in 3 years because he just never got the purpose and the drive that he got from indulging in the start-ups. He quit his job because he is very passionate about founding start-ups.

He loves the ups and downs and the journey that comes alongside a start-up. When talking about how he quit his job, Han Jin expressed how that decision has turned out to be one of the best he has ever taken.

Han Jin also admitted how scared his mother was when he left the job. “I think they’re still scared!” Han Jin jokes. At that time, he had a discussion with his mother about the decision he had taken. He told her that eventually he would have a family, a life and he would have to settle down. “I gotta do this now, mum… I gotta just be foolish now”, Han Jin spoke as he recalled the conversation he had with his mother.

About LUCID and its early days

Han Jin met the person who was to be LUCID’s cofounder, during late 2014 in a Starbucks (his start-up began in 2015). That is where he learned about this inspirational technology that can manipulate images and create a 3D model that mimicked the way humans perceive things. All of this was done through software. At that point, Han Jin thought it was great technology, but he was thinking ahead. He immediately asked “Cool technology” that what were they going to do with it?” That was the start of LUCID’s journey. A company that uses Artificial Intelligence to extract 3-Dimensional information out of images.

As the two of them teamed up, they started thinking of ways by which they could market this and turn it into a tangible product. At this point, Han Jin used his journey and the fact that he stayed away from his parents most of the time as an inspiration. With LUCID, he wanted to use Advanced technology to connect people. While social media companies have always had a similar goal which is of connecting people, what Han Jin and his cofounder were doing here was different. They were trying to shorten physical gaps between people who care about each other and make people feel connected. He wanted people to share their memories just the way they first saw them despite the physical distance between them. In the start, hardware that could accomplish a task of this magnitude was not available. Thus, Han Jin and his partner decided to create a 3D camera that could help them achieve this goal.

Han Jin’s most important attributes as a CEO

Han Jin believes that the personal quality that has helped him the most throughout his entrepreneurship days is curiosity. All great minds are curious. This curiosity is what helps them find new and innovative ways of doing things. That is precisely what the case is with Han Jin—always looking for new ways to do things—still trying to find new ways to market and be economical. Han Jin combines his curiosity with perseverance. Working hard every day, weathering the storms, and having the courage to go on is an acceptable quality to have, and it is something that Han Jin seems to possess quite a bit of.

Han Jin’s credits his “metric-based leadership approach” to his first manager. This approach is a very laid back one. He does not believe in an autocratic leadership style. Instead, Han Jin chooses to set some metrics that can help the employees assess their performance. Han Jin also believes that this leadership style makes his company feel greater than the sum of its part. Self-accountability triggers self-motivation to do something bigger than yourself, which is what every company needs from its employees. 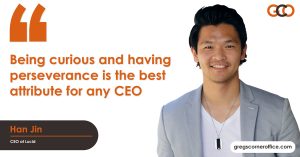